FEBRUARY: TO BE YOUNG, GIFTED AND BLACK 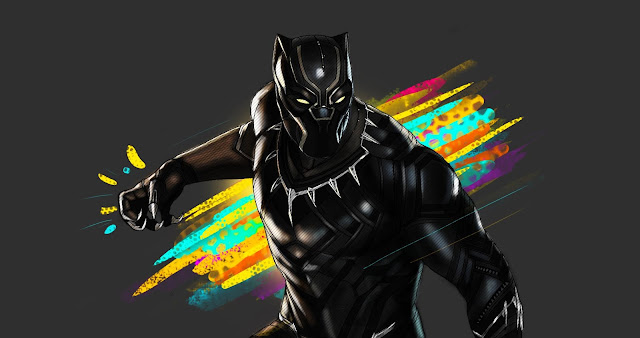 February. February. February. The month of love. The month of romance. Home to none other than the infamous Valentine’s Day. The February love isn’t only exclusive to couples, it is also felt by communities at large as it was the month that the BAME (1) community fell in love with BLACK PANTHER. Can you believe it’s already been a year since Black Panther was released in the UK??? Time has gone

If you haven’t heard of Black Panther (I’m slightly judging you), it is the first Marvel Cinematic Universe movie with a black director and a predominantly black cast; meaning that for the second time in just over two decades we have our very own black Marvel superhero movie (Blade was the first marvel movie, released in 1998). Black Panther was released in the United Kingdom on the 12th of February 2018 and has created quite a buzz in the world of film.


EVERYONE was talking about Black Panther even before it was released, the hype didn’t die down after it was screened in cinemas and even a year later; people will still mention Black Panther (as is happening right now). Whether it’s females fangirling about the male actors and Michael B Jordan being shirtless, the cultural significance of the movie, or the soundtrack - there’s at least one thing you can say about it. I think the main factor attributing to its popularity is that it’s not just mainly black, it is also African. It was filmed on African soil, the characters spoke Xhosa (one of the many languages spoken in South Africa) and the costumes screamed Africa.(2) For years, whenever we hear or read about Africa in the news we’re almost certain that it’s going to be negative; advertisers constantly shove images of starving African children in our faces painting a distorted picture of Africa, portraying it to be this horrible place with nothing but poverty and corruption. So the fact that Black Panther has gone and changed that narrative is very reassuring and heart-warming for us Africans. It sends a clear message to the rest of the world - Africa is not all bad, it is more than what is portrayed in the media, Africa is a great continent with crazy potential. Another reason to why I think it hit the spot for so many people is because there was something for everyone as it addressed numerous social issues such as racism, immigration and feminism in addition to other topics including family and power. There is some representation for all sorts of people from all walks of life, especially minority communities which probably explains why it is so popular all over the world.


Black Panther has done incredibly well in the film world as it is the second fastest grossing movie of all time meaning that has even surpassed Titanic. As if that wasn’t big enough: it is the highest grossing movie from a black director, twelfth highest grossing movie of all time worldwide, biggest solo superhero movie worldwide, as well coming in third place for the leggiest* Marvel Cinematic Universe movie. (3) And it doesn’t stop there! Black Panther was awarded ‘Outstanding Performance by a Cast in a Motion Picture’ in addition to ‘Outstanding Action Performance by a Stunt Ensemble in a Motion Picture’ at the Screen Actors Guild (SAG) awards on the 28th of January (can we take a minute to acknowledge how fiiinnee Angela Basset looked, imagine looking like that at 60!!)  and is nominated for SEVEN Oscar awards this month. Getting nominated for that many Oscars in itself is a big deal, but did you know that is the FIRST superhero movie to get nominated for best picture?(4)

Because this is history being created right in front of our eyes! The film industry has been around since the 1890’s and only now, over a hundred years later are people of other races being acknowledged on this scale. As mentioned earlier, Blade was the first marvel movie to be released and it actually did pretty well but Black Panther’s success is on another level. It has transcended all racial stereotypes in all forms as it brilliantly showcased black talent. Whether we’re talking about the acting, directing, costume making or music, Black talent is showcased in all forms. In the words of Chadwick Boseman (T’Challa) ‘And the second question is: Has it changed the industry? Has it actually changed how this industry works, how it sees us? And my answer to that is, to be young, gifted and black." Boseman proceeded "We all know what it's like to be told that there is not a place for you to be featured, yet you are young, gifted, and black. We know what it's like to be told to say there's not a screen for you to be featured on, a stage for you to be featured on. We know what it's like to be the tail and not the head. We know what it's like to be beneath and not above’ So yeah it, might be ‘just a movie’ but for the people involved in the production of this film, its huge andddd sometimes it’s the small changes that make the big changes.

Another film that has done exceptionally well is Crazy Rich Asians which I personally loved! It was also nominated for outstanding performance by a cast in a motion at the SAG awards. The fact that these diverse movies are excelling shows that there is a demand for more. People love these films, people love seeing characters that look like them on their screens because they can relate to them, because they have something that they can be proud of, because it acknowledges their existence and celebrates their identity. The BAME community is really upping its game and that’s definitely progress definitely worth being proud of. Hopefully this upcoming generation get to see more cultural diversity on their screens which might teach them that success doesn’t stop at your skin tone or heritage. The only way is up. We still have a long way to go, but we can’t forget how long we’ve come.

And just to finish off, if you loved Black Panther, then I have some good news for you – it is very very likely that there will be a Black Panther 2 coming to your screens sometime, some year, soonish.

(3) Legginess definition: In movie industry parlance, a film has “legs” when its box office trajectory defies normal patterns by running longer and more successfully in theaters than would typically be expected.  A “leggy” film is one that has strong and profitable box-office stamina and audience drawing power far beyond the opening day or opening weekend.